Starting A Registration
How to start a new registration.

My Account - Part 2
Importing, Managing, and Using a Personal Roster 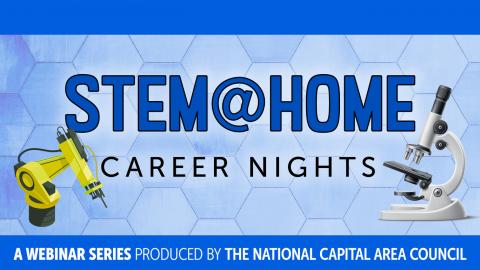 This STEM@Home Speaker Series is a way for you to learn about exciting STEM careers! Every Thursday evening, we will host conversations with STEM professionals, activities and virtual games (including one with virtual reality!) through ZOOM & Facebook Live. Join us at 7 PM every Thursday night!

We will continue to populate this page with the bios; for now please see the schedule below!

There are two tiers to participate:

By day, Christopher Cooper is a Special Agent-in-Charge at the U.S. Department of Labor, Office of Inspector General. He is responsible for the digital forensics and data science divisions supporting the criminal investigation. After work hours, Christopher is an Assistant Scoutmaster with Troop 1853, and the Committee Chair for Crew 1853. He will discuss the basics of both digital forensics and data science, while providing resources to learn more about both topics at home.

This is a forensics presentation! Ms. Delpizzo will guide you through a model to show a burglarly and show American forensic scientist, Ms. Glessner Lee's work.

This event is open to all youth and adults (including those who are considering Scouting).  Please ensure that youth have permission from a parent/guardian. All attendees are expected to behave in a courteous manner to each other and maintain a safe online environment.

If you'd like to join Scouting or learn more, please visit http://www.beascout.org

PAST TALKS ARE AVAILABLE RECORDED | SEE BELOW FOR DESCRIPTIONS

Dr. Fricke loves to take things apart and put them back together. He also loves measuring stuff: lengths, speed, time, volumes. You name it he will measure it. He is also likes optics and photography. His passion for these things is currently being used to create new x-ray and MRI machines. In real life he is a medical physicist.

May 7: Technology Night: A Conversation with Dave DuHadway

Dave is a pilot for United Airlines, is a former Scoutmaster of Troop 1345 in Burke, Virginia and currently NCAC's Vice President for Leadership and Governance.

"I loved math and science when I was in school but I also enjoyed sports, hiking, camping, and working with my hands (like playing the guitar).  I learned to fly after joining the Air Force in college, and they are always on the lookout for people with an interest in STEM.  Learning to fly was a lot of studying the technical aspects of flight, combined with a lot of “hands on” work in the airplane, learning to takeoff and land, and learning how airplanes handle in the air.  I’ve been flying since 1989, and I’m trained in eight different airplanes, including Remotely Piloted aircraft, like the Predator drones that the Air Force used to fly (they now have bigger and better versions)."

May 14: Mathematics Night: Learn to Play Chess for Absolute Beginners – Part I: Moves and Rules

Session 1 will focus on the rules of the game and how the pieces move.
Roger Claff is an environmental policy analyst for the American Petroleum Institute.  Roger holds a bachelor’s degree in chemical engineering and a master’s degree in environmental engineering, and Roger is a registered professional engineer in the State of Virginia.  In the National Capital Area Council, Roger is the Powhatan District Assistant District Commissioner for Roundtables and the Cub Scout Leader Training Chair.  Roger is also a member of the NCAC STEM Committee.

Roger learned to play chess in fifth grade.  He still vividly remembers losing his rook repeatedly by the same sequence of three opening moves before he finally caught on.  Roger played on his high school chess team at Thayer Academy in Massachusetts and later in the University of Maine chess club.  Roger was a United States Chess Federation member through college, albeit one with the most pedestrian of ratings.  Roger still enjoys playing the game, enjoying the beauty and truth found in its combinations of moves.  But in wisdom that can only come with age, Roger now understands playing chess is above all an exercise in humility.

May 21: Mathematics Night: Learn to Play Chess for Absolute Beginners – Part II: How to Play a Game

Session 2 will focus on the three phases of a game of chess, chess tactics and strategies during play. Mr. Claff will hold a discussion and Q&A after.
Mr. Roger Claff (see above) : In 2006 Roger, along with Peter Snow, the principal of Snow’s Chess Academy, created the National Capital Area Council’s Akela Chess Classic, a five-round, touch-move chess tournament for BSA members.  The tournament continues to this day and is as popular as ever.  The 2021 tournament will take place on February 6 for Cub Scouts and on February 13 for youth in Scouts BSA.

May 28: Engineering Night: A Conversation with LT John Delpizzo

John is an Eagle Scout from Troop 980 with a degree in Computer Science and a Minor in Cyber Security. But he is also interested in anything having to do with computers, robotics and programming. He will be working in Cyber Operations in the Air Force and is going to his first assignment this summer. As a hobby he likes to work with Virtual Reality (VR) equipment and software; he will explain how it works and allow the viewers to experience a bit of what VR is capable of doing. It’s not just about gaming! (But yeah, the games are pretty cool).

The universe can be very strange. I will describe an example and some interesting consequences such as time travel. I will also describe just what is a physicist, what do they do, and how do you become one. Finally I will give a brief description of my career that spans a wide range of topics and answer your questions.

What are neutrons and how are they useful? Neutrons are a particle with no electrical charge and which stabilize atomic nuclei. They are liberated as a byproduct of fission in nuclear reactors and radioactive decay and can be used as a probe to determine the composition and structure of materials. Because they have a magnetic moment they can also tell us about the magnetic structure of different kinds of materials. In a neutron scattering facility, scientists use neutrons to determine the structure and dynamic properties of all kinds of materials, from superconductors to superglue.

Dr. Nick Maliszewskyj earned a Ph. D. in Condensed Matter Physics from the University of Pennsylvania in 1994. He currently works as the team leader for data acquisition at the NIST Center for Neutron Research, an international facility for materials research. He has served as an instrument scientist and lead controls engineer for more than fifteen neutron scattering instrumentation projects over his twenty five years at the facility.

Pets, livestock (like dairy cows and honeybees), and zoo animals need doctors, just like people do.  But, did you know that veterinarians do more than give shots and do surgery? Veterinarians have many important roles in our everyday lives that you may not be aware of.  Why on earth would you want to be a veterinarian?  How do you become a veterinarian?  What are some of the invisible roles veterinarians play in your life?  What’s life like as a veterinarian in practice?  What’s it like working as a veterinarian in the government?  Do veterinarians get to play with puppies and kittens all day long?  Who is James Herriot and why is he so important to many veterinarians?  Are pheasants native to the U.S.?  How fast does a ferret’s heart beat?  Does heartworm disease only affects dogs?  Which carries more of a horse’s body weight—its front legs or its back legs?  Is xylitol is safe for dogs?  (And what is it?)  Get the answers to these and other burning questions during Dr. Stamper’s talk.

Dr. Carmela Stamper earned her D.V.M. degree from The Ohio State University in 1995.  She worked in a companion animal (pet) hospital before starting a career with the U.S. Food and Drug Administration’s Center for Veterinary Medicine.  Her first role at FDA was as an animal drug reviewer, where she evaluated data for new animal drugs.  She now works on the Center’s Education and Outreach Team, where she writes articles for the Center’s website, responds to phone calls and emails from the public, and helps teach the public about FDA’s role in their lives.  Dr. Stamper is an assistant scoutmaster with Troop 1397 in Damascus, MD.  Her two-legged family includes her son, who is an Eagle Scout, and her husband, who is also an assistant scoutmaster in Troop 1397.  Dr. Stamper’s four-legged family includes Daisy, her tennis-ball-crazy Flat-coated Retriever, and Bowie, her pudgy guinea pig.

Why would anybody want to enter the field of math and statistics? It is just a bunch of numbers, symbols, and formulas. However, math is much more than that. Math helps you think logically, and can allow you to model anything that exists. Studying math includes studying lots of science and engineering to show you where math can be used. I have used math in many ways, to include epidemiological studies, modelling construction projects, working on the consumer price index, and in the end nuclear safeguards and security. You never know were math will take you, but it will be an interesting adventure.

Mr. Rivers earned his BS in Mathematics from Rensselaer Polytechnic Institute in 1977, He studied Statistics in Graduate school at the Pennsylvania State University. He worked for a number of private companies and several government agencies, to include the Veterans Administration, the Bureau of Labor Statistics, the Department of Energy and the Nuclear Regulatory Commission (NRC). He recently retired from the NRC and is now an independent consultant supporting the government and industry. Mr. Rivers is a Fellow of the Institute of Nuclear Materials Management. As a child, he was a Boy Scout, especially enjoying hiking and camping. He is married and has four four-legged kids.

We all have problems, right? Not just math problems, physics problems or engineering problems; but all kinds of problems ranging from the relatively "simple" (what to wear, where to go for lunch, whether cats eat pancakes) to the relatively "difficult" and challenging (curing diseases, finding cheap, clean energy sources, how to get the skunk out of the garage).

And the frustrating part is, all those problems you work in school don't ever seem help you out in the real world when you run into those other problems.

Or do they? What if I told you the same skills that you develop solving math and physics problems can be used to solve other kinds of problems too?  Everything from which way a bus is going to what color the sky is at night time to how to get rid of an 8-ton biohazard on a soggy beach.

Tune into Dr. Tynes's talk and he’ll show you!

Dr. Hatcher Tynes is an Eagle Scout (class of '86) from outside a small town in Louisiana (most "famous" for serving as "Hazzard" in that terrible "Dukes of Hazzard" movie).  His career in physics has taken him from roaring at students and faculty as an assistant professor at a "little cow college" in Texas to roaring at other scientists, engineers, government and military types and vendors as a senior scientist and subject matter expert at the Joint IED Defeat Organization and now the Defense Threat Reduction Agency.  ("Ask me about my VAMPIRE files!")